Call Us Today! 1.775.440.3705|lessons@bridgewaterswimacademy.com
Previous Next 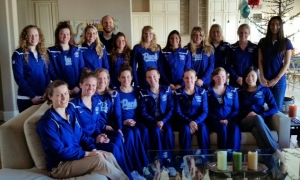 As a Division-1, Pac-12 competitor for the University of Oregon, I will always have a passion for competitive swimming and racing.  That is why I invited the UNR Women’s Swim Team into my home after their fierce win over San Jose State.  It was a special day at the Lombardi Recreation Center and it was awesome to have so much Nevada energy at the pool.

UNR Women’s Swim Team Seniors finished their last home meet with a bang, leading them to a victory over San Jose State, a team that was previously undefeated.    The team started with a win in the 200 Medley Relay, powered by Arantxa Medina’s 29.2 breaststroke split.  The B team won the third-place points by one-hundredth of a second thanks to Michelle Forman’s excellent freestyle finish.  Yawen Li then led from start to finish in the 100 Free while Emma Payne made a strong move in the back half of the race to take second place.  Emma’s move was particularly impressive since this was her first 1000 free…ever!

In the 200 Free, we took another 1-2 finish as Teresa Baerens and Josefin Eriksen blazed to their fastest times of the season so far.  Three swimmers under 1:00 in the 100 back with Jaeger Turner taking second place, Kate Hofmeyer tying for third, and Kaelie Reviglio finished fifth.  Ary, on a major roll from that relay, won the 100 breast with Riley Hilbrandt stepping up for third place and Lauren Allen swimming a lifetime record…something you don’t see too often in a dual meet.  Sita Kusserow and Erin Fuss pushed the pace hard in the 200 fly to keep the Pack energy going with another 1-2 finish.  Jocelin Drennan swam one of her fastest 200 Flys of the season even though she had just competed in the 1000 free.  Similarly, Emma (right out of the 1000) finished second in the 50 free with a major surge of speed in the last five yards.

Meanwhile in the diving well, Krysta Palmer destroyed the school record on the 3-meter!  She took first place, while Wendy  Espina won the third place points.  They repeated the performance on 1-meter, finishing 1-3 again.  Krysta’s improvement in just her third year of diving is mind-blowing and we’re so proud of the work she does with Jianli.

In the backhalf of the meet, several more victories were made with Teresa in the 100 Free, Yawen in the 200 Breast and 200 IM, and Sita in the 100 Fly.  In the 200 Backstroke, two freshmen stepped up.  Josefin swam her fastest 200 back of the season for second place and Jaeger Turner surprised herself  by getting third place after adding extra dolphin kicks on her last 25.  The team finished the meet with a huge win in the 400 Free Relay.  The overall win was incredibly fulfilling for the UNR Women’s Swim Team.

Right after the meet, about 10 team members headed to the Northern Nevada LEGO competition to cheer on Eagle Valley Middle School  and a few others went to the All-Sport Clinic to teach children about swimming and diving.   Their willingness to do so much in and out of the pool shows that the UNR Women’s Swim Team are champions in and out of the pool.

As a recent transplant to the Reno area, I am quickly becoming the UNR Women’s Swim Team biggest fan.

This site uses Akismet to reduce spam. Learn how your comment data is processed.